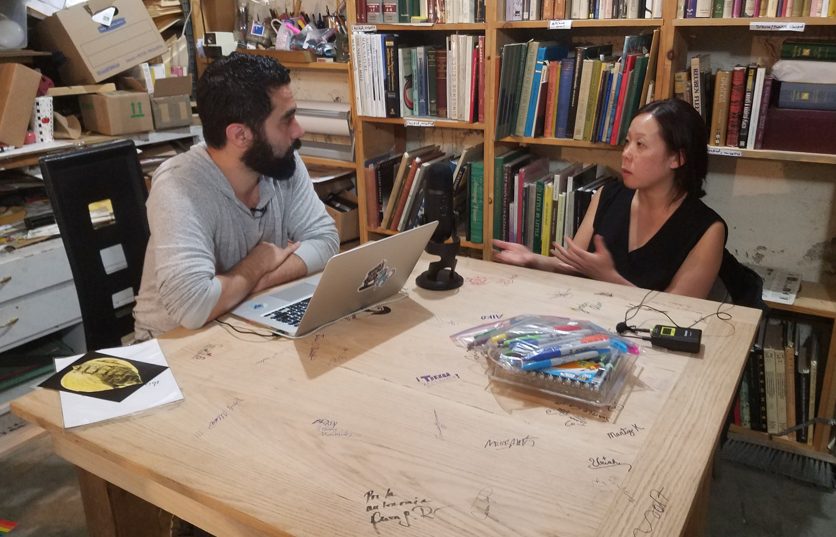 Upisode 25: After a championship-level rant about the Showbox and related housing issues, Ian sits with poet, photographer, and public artist Shin Yu Pai, a 2014 Stranger Genius Award nominee. The pair discusses “when you know” about a career in writing and what makes “good” versus merely honest writing; Shin Yu shares her thoughts on form, and then the conversation turns to what it means to be a public artist in a time of great civic change.

Shin Yu Pai‘s whose work has appeared throughout the U.S., Japan, China, Taiwan, The United Kingdom, and Canada; her poems have been commissioned by the Dallas Museum of Art twice and her work is also featured in the Poetry-in-Motion Program sponsored by DART. She has been a featured presenter at national and international literary festivals including the Geraldine Dodge Poetry Festival and the Montreal Zen Poetry Festival.

A recent Town Hall Seattle Inside/Out Neighborhood Resident and Redmond Poet Laureate, Shin Yu’s latest installment can be seen August 25th and 26th as part of the DNDA Arts in Nature Festival at Camp Long.  Her work will center on the exploration of the camp as a scouting center in the middle of the last century.

Later this autumn, she will be busy staffing a trip to Bhutan for the collaborative global exploration project Atlas Obscura, for which she is curator, and has highly recommended both their international trips and Seattle programs.