Dam Removal of the Elwha River

The effects of the Elwha River Dam

Located on the Olympic Peninsula in Washington State, the Elwha River flows through Olympic National Park, has extensive tributaries in the Olympic Mountain range and empties  into the Strait of Juan de Fuca.

Historically, the river watershed provided spawning grounds  for Pacific salmon and other species until the river was dammed in the first half of the 20th century to provide hydroelectric power to the nearby city of Port Angeles and the peninsula at  large. The dams were subsequently removed in the 2010s, and the original habitat has been  mostly restored. They were the first and currently only dams of this size or scope worldwide that have been removed. 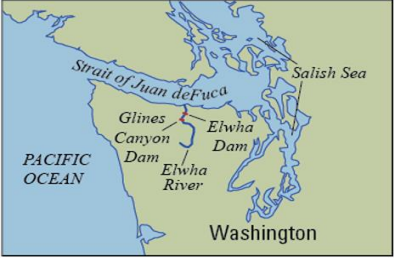 In 1913, the Elwha River dam was completed five miles from the mouth of the river, blocking  most of the traditional migration pattern of several types of fish, key among them several species of salmon and other types of anadromous fish. The Glines Canyon dam was  subsequently completed upstream in 1927, and although Washington state law during that  period required that dams be built with a method of fish passage, neither dam was built with  such measures. In 1992 the U.S. Congress passed a law requiring restoration of the  watershed, authorizing dam removal and providing funding for the project. Destruction of the dams began in 2011 and was completed in 2014.

In addition to impeding historical spawning routes of salmon, the dams also caused  approximately 30 tons of sediment to be deposited into their reservoirs. Not only did this turn the once sediment-rich downstream riverbed into hardened cobblestone, the loss of the river’s natural delta had a significant impact on the estuaries and coastal systems. It also resulted in coastal erosion due to the strong current of the Strait of Juan de Fuca.

Creation of the reservoirs also raised the water temperatures in the lakes and waters  downstream that were not hospitable for spawning fish. Therefore, installing methods for fish  passage through the dams was not a feasible solution for restoring the natural spawning  grounds in upriver tributaries, as the fish prefer colder temperatures, similar those in the  adjacent ocean where they spend most of their lives. The warmer temperature also  encouraged the growth of parasites detrimental to fish and other animals, as well as reducing  the growth of native species while increasing non-native species.

In a matter of weeks after the start of dam removal, fish began returning to the Elwha River, and the spawning of salmon, as well as lamprey and other anadromous fish, resumed. In the years following, varied species of salmon have been observed returning to the river, and by 2020, the first juvenile salmon hatched in the restored watershed had returned from the ocean to spawn.

Just as significant was the return of the historic Elwha River delta. Over a two-year period  from 2011-2013 it was estimated that 90 percent of the sediment released from the phased removal of the dams had found its way to the river’s mouth. The reintroduction of river  sediment formed structures that in addition to impeding coastal erosion are restoring the  natural habitat both on and off the coast.

The estuary complex at the mouth of the river prior to dam removal was highly influenced by tidal conditions, resulting in daily fluctuations in depth, salinity, and temperature. Changes in  sediment deposition and water column turbidity helped to restore and stabilize these critical

areas. These well‐defined pocket estuaries support a diverse population of macro invertebrates and plant communities, and like other estuaries in the Salish Sea they are also  important nursery habitat for many fish species, including several salmonids. With the return  of natural river sediment flow, the estuaries have quickly begun to regain the natural balance, although it is expected to take several years for the estuaries to return to previous conditions.

The release of sediment into the Strait of Juan de Fuca is also helping to slow/reverse erosion  along the coastline. The swift and alternating currents of the straight move the sediment  efficiently up and down the shoreline, reducing/eliminating the need for human processes  such as the application of anti-erosion netting, dredging and other methods to stop the loss of land, methods that also adversely affect the natural habitat beyond the mouth of the Elwha. In addition, sand bars have begun to form at the mouth of the river, which could turn into permanent structures (such as the nearby Dungeness spit) that could provide resting spots  for harbor seals, and safe habitat for sea and shorebirds, and other various marine wildlife.

Photos showing the evolution of the Elwha River mouth and estuary complex during dam removal.  https://aslopubs.onlinelibrary.wiley.com/doi/full/10.1002/lno.10129

The joint removal of the Elwha and Glines Canyon dams was a first-of-its-kind case study for the engineering challenges of removing dams of their scope and size without causing further damage to the local environment, and to date are the largest project of this type. The relative quickness which the river channel and estuaries have reverted to a natural state provides  optimism for the future of dam removals.

The subsequent and ongoing studies related to the restoration of natural habitat along the  river and its tributaries, as well as the impact the returning river delta, currently provides one of-a-kind information for future dam removal processes at locations around the world, and an opportunity for decades worth of scientific research on the effects of dam removal and  restoration of natural habitat.

Plans are also in the works to remove four dams from the lower Snake River in Washington  state to aid in the return and successful spawning of salmon. Contact your Senators in  Washington DC to tell them we need action to aid struggling salmon and Orca whales in the  Pacific Northwest. Further information can be found here:

Liked it? Take a second to support Cascadia Underground on Patreon!

Where You At?–A Bioregional Quiz

The Challenge of Bioregional Education